History has a way of repeating itself. JP Nichols, the CEO of Clientific, recites a passage from Theodore Levitt’s 1960 treatise “Marketing Myopia“ to illustrate how railroads missed a window of opportunity in their business life cycle:

“The railroads did not stop growing because the need for passenger and freight transportation declined. That grew. The railroads are in trouble today not because that need was filled by others (cars, trucks, airplanes, and even telephones) but because it was filled by the railroads themselves. They let others take customers away from them because they assumed themselves to be in the railroad business rather than in the transportation business. The reason they defined their industry incorrectly was that they were railroad oriented instead of transportation oriented; they were product oriented instead of customer oriented.”

Then, Nichols makes the connection of this faulty business strategy to the modern banking system. As an industry, he feels the banks have become product rather than customer focused. Here’s how he describes the slippery slope slide into irrelevance:

Mature industries erode subtly at first. Hungry upstarts nibble at segments too small or unprofitable for entrenched incumbents to waste much energy protecting. But eventually the new entrants gain traction and move upmarket to larger and more profitable segments. And new categories are invented along the way.

Then, as it relates to banking, he writes:

Economic cycles wax and wane, but people will always look for ways to save and borrow, to move money from one place to another, and to occasionally get some advice from someone they trust. Traditional financial institutions like banks and brokerages held a near-monopoly on those activities for generations, but banks that continue to be bank-oriented will continue to lose to an increasingly broad group of competitors that are truly customer-oriented.

Think about what’s been happening around the edges of the banking industry. Peer-to-peer lending platforms and retailers’ captive financing programs have taken lending business that once was nearly the sole province of banks. New payments ventures like Square and Dwolla provide services that people want to use because of their great design and ease of use. SigFig is an online registered investment advisor with over $50 billion in assets tracked on its platform. Innovative startups like Simple and Movenbank are reinventing the whole notion of what it even means to be a bank.

The scariest part? None of those companies even existed five years ago. 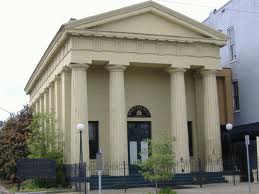 In contrast to the banks’ inability to anticipate the needs of consumers as well as these new enterprises, Nichols salutes another highly regulated industry, healthcare, which he says, reinvests 10% to 15% of its revenues back into research and development, and “represented 21% of the $603 billion spent globally on R&D in 2011, according to a Booz & Co. study. Financials don’t even make the list, lumped in instead with the 2% of “other” industries, collectively in tenth place.”

Nichols, who was the first chief private banking officer for US Bank, challenges the industry to redefine what business they are in, as the railroads should have but didn’t. He feels that a redefinition of the industry to become more responsive to consumer needs and niche services to serve them would be revolutionary.

But, set aside railroads and banks. Look at your own organization now. How can you become more innovative? How can you light the fire of intrapreneurship so that it burns brightly a generation from now? Very simply: begin with the customer in mind and build something that will blow their socks off in terms of its ability to resonate with deep seated needs. Go do it!